Based on the collected novels and short stories of Sir Arthur Conan Doyle. In a time and place where gender roles are rigidly defined, Dr. Dorothy Watson and Miss Sherlock Holmes dare to challenge societal norms by providing a necessary, if unconventional, service. Inspired by the works of Sir Arthur Conan Doyle, this theatrical “fan fiction” re-examines the world of Holmes and Watson, exploring the added challenges and risks faced by these two iconic characters if they were women.

Purchase the play at Dramatic Publishing.

A Tale of Two Cities

Adapted from the novel by Charles Dickens. Set against the backdrop of the French Revolution, A Tale of Two Cities follows the lives of Charles Darnay, a virtuous French ex-patriot who falls victim to the indiscriminate wrath of the revolution; and Sydney Carton, a dissolute English barrister who struggles to redeem his ill-spent life through his unrequited love for Darnay’s wife. It ranks among the most famous works in the history of English literature.

Purchase the play at Amazon.

The Count of Monte Cristo

Adapted from the novel by Alexandre Dumas. The lives of three powerful families are thrown into chaos with the arrival of the mysterious Count of Monte Cristo, a man of untold wealth who carries with him secrets from the past which may destroy them all.

Purchase the play at Amazon.

The City and the City

Adapted from the novel by China Miéville. In a place where seeing what is right in front of you can be a serious crime, Inspector Tyador Borlú of the Besźel Extreme Crime Squad must solve the mystery of a young woman’s murder. His investigation will bring him face to face with the fringe groups who simmer with hatred for each other beneath the surface of Besźel and her sister city, Ul Qoma, all the while risking retribution from the secretive entity that maintains the border between the two.

Soon I Will Be Invincible

Music and Lyrics by Christopher Kriz

Adapted from the novel by Austin Grossman. Fatale: Cyborg super-soldier. Newest member of the world’s most elite team of superheroes, the Champions. She has enhanced vision, super strength, and a tactical computer hardwired to her brain. Also, awkward in social situations, and can’t use a chair if it isn’t steel-reinforced. Doctor Impossible: Supervillain. Smartest man in the world. Suffers from a condition known as Malign Hypercognition Disorder, better known as Evil Genius Syndrome. He’s tried to take over the world twelve times… and counting.

Drama/Horror – 15 minutes – 4 actors
Ghost hunters Leslie and Richard are out of their depth when they arrive to investigate the strange history of “Motel 666.”

Items of a Certain Value

Drama/Horror – 20 minutes – 4 actors
An unexplainable vision causes a down-on-his-luck father to second-guess his decision to sell a family heirloom.

Drama/Horror – 10 minutes – 2 actors
After an unexpected discovery on the ocean floor causes all hell to break loose on board a submarine, a pair of sailors hurry to record one last warning before it’s too late.

Comparing Notes at the End of the World

Drama/Horror – 10 minutes – 3 actors
Three survivors discuss their experiences after the laws of the universe abruptly change, bringing about a bizarre sort of apocalypse.

Does This Look Infected?

Drama/Horror – 10 minutes – 3 actors
Returning from a weekend in the woods, Jenna asks a co-worker to take a look at a bug bite on her back. At least, she hopes it’s just a bug bite. 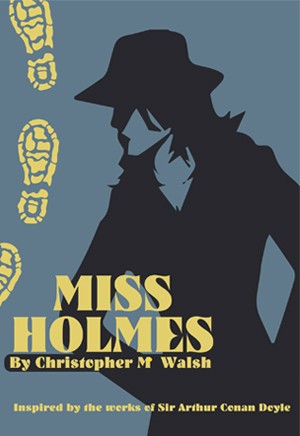 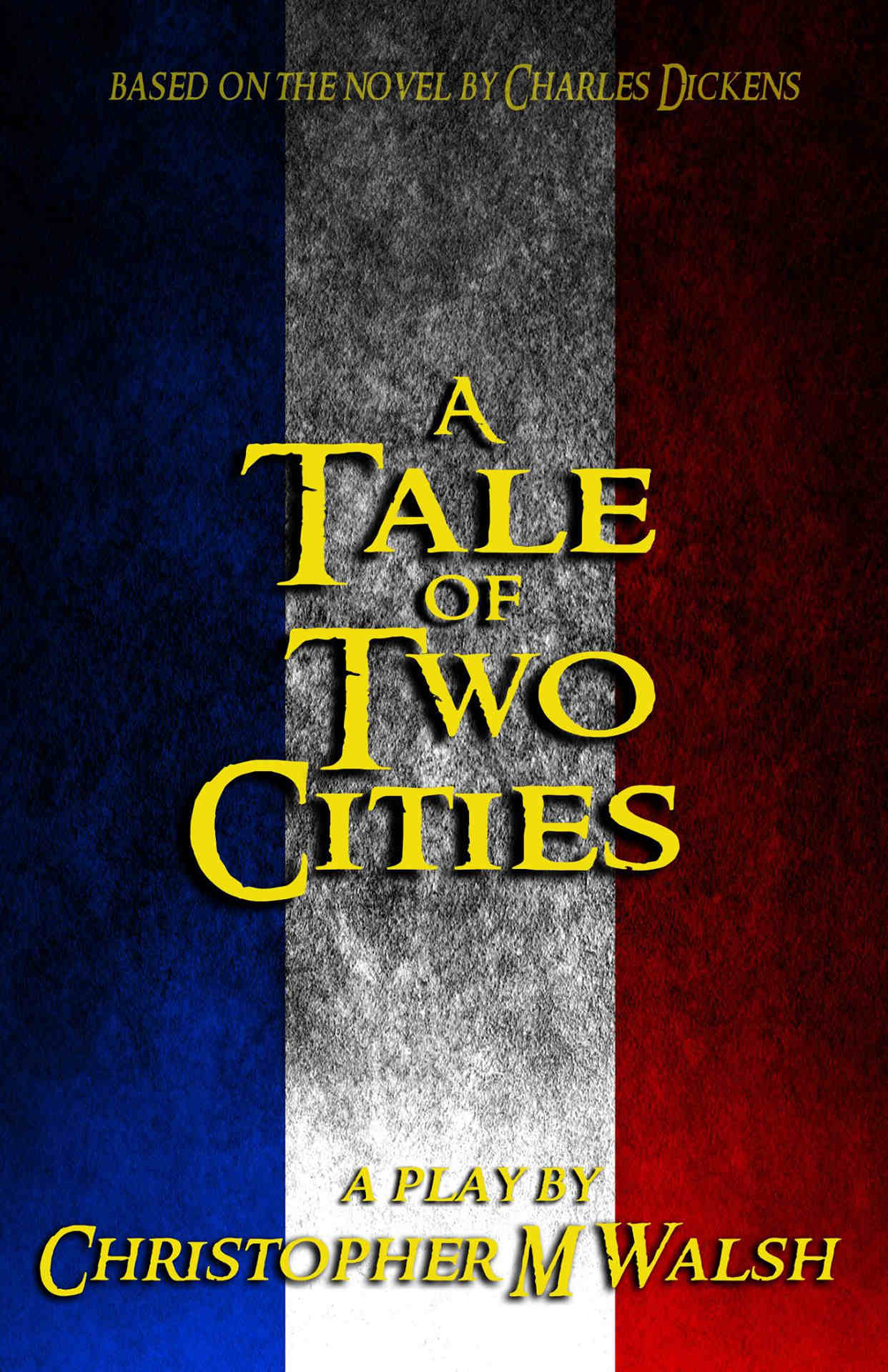 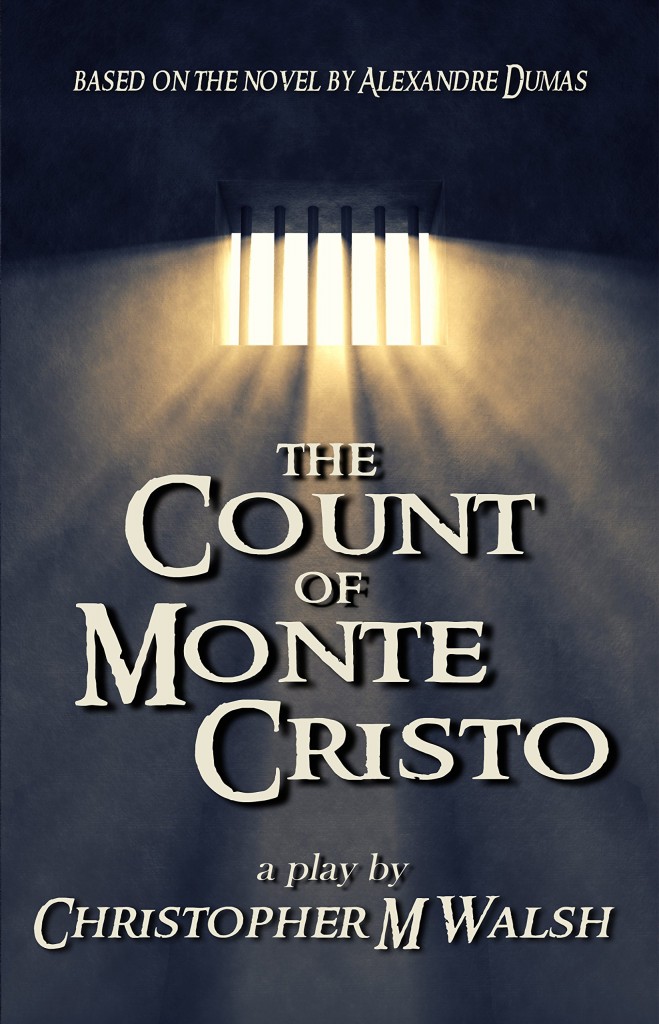 “Cincinnati Theatre We Loved in 2019” – CItyBeat

“Christopher M. Walsh’s ‘Miss Holmes’ offers a cunning and highly enjoyable gender-bent take on Sir Arthur Conan Doyle’s maddeningly brilliant detective… Walsh manages the tricky task of providing both old-school fan service and feminist insight… Walsh’s take suggests, with sympathy and wit, that being the world’s greatest detective is even harder when one is metaphorically doing it backward and in high heels.” – Kerry Reid, Chicago Tribune

“4 STARS… Miss Holmes offers much in the way of pleasure to theatergoers. It’s fun, it’s thoughtful, it’s compelling and empowering and unexpected. But of all the delights it grants audiences, there’s one that surpasses the rest: It leaves plenty of room for, and even demands, a sequel. If there’s any justice in the world, we’ll get one.” – Allison Shoemaker, Time Out Chicago

“Walsh has written a great detective story in the style of Conan Doyle, adding interest and enjoyment by changing the gender of the main characters. The social and political realities of the time and place allow him to double down on the feminist themes that he incorporates, giving the play more relevance in the present.” – Nancy Grossman, Broadway World Boston

“Walsh takes Miss Holmes seriously, unlike many of the men of the Victorian era, and the mystery he’s contrived for her to solve is as dangerous and opaque as anything the traditional male Holmes had to face. … Walsh’s insights about gender dynamics and institutionalized misogyny bubble up in hindsight for days after seeing the show.” – Kilian Melloy, WBUR’s The ARTery

“4 STARS… Walsh’s script carefully balances the need to establish the female characters’ place in the world with the particulars of the mystery, and he is able to connect the themes of sexist oppression with the case quite smoothly. Of course, this being a Sherlock Holmes story, the truth of the case is quite a bit more complicated than any easy, pat didactic. For the many fans of the great detective, Miss Holmes is a true delight—expanding and commenting upon the original, while adding its own twist.” – Jacob Davis, Around the Town Chicago

“‘Miss Holmes’ is a savagely accurate and yet comic wallow in the ugliness of the Victorian backlash against women and the gloriously indomitable courage of Victorian feminism. The play’s grasp of class issues and historical context is impeccable, its witty rebuttal to Doyle both grateful and corrective. I plan to go back to see it again as often as I can manage.” – Jennifer Stevenson, Book View Cafe Blog

“[Walsh’s] dialogue positively cackles with energy and delights in its commentary on Victorian England. … ‘Miss Holmes’ never overplays its feminist politics, preferring instead to slowly build how disadvantaged Holmes and Watson are as intelligent, independent women in a society that so clearly does not value such attributes.” – Peter Thomas Ricci, Chicago Theatre Review

“This wonderful romp of a mystery is fast-paced and will keep you guessing. Without giving anything away, I will say this much: the ending is incredibly satisfying and earns Miss Holmes a respected spot in the Sherlock Holmes canon.” – Keely Flynn, Lollygag Blog

“The playwright, Christopher M. Walsh, should particularly be commended. He has captured both Holmes and Watson’s characteristic ways of speaking and translated them to an entirely new mystery. One that is engaging and contains a twist or two and uses the fact that the main characters are now women to further the action and the plot. The gender-swap is not a bug, it’s a feature.” – Suzanne Magnuson, Splash Magazine

“CRITIC’S PICK… Christopher M. Walsh’s play offers comedy, drama and — the best part — an opportunity to elevate the many voices of women in the arts.” – Jenifer Moore, CityBeat

“Walsh’s detective story is smart, sophisticated and droll. … There is so much to love in MISS HOLMES that I want more! Encore! Series!” – Katy Walsh, The Fourth Walsh

A Tale of Two Cities

“Charles Dickens’s 1859 novel, set during the Reign of Terror that followed the 1789 French Revolution, comes to the stage in a taut, suspenseful adaptation that captures the romantic idealism, dark humor, and social outrage that drive this ripping good yarn.” – Albert Williams, Chicago Reader

“Christopher M. Walsh’s adaptation of Charles Dickens’ novel — a saga of unexpected heroism during the French Revolution — is Lifeline Theatre latest page-to-stage triumph. … Coherent as it makes the sprawling story of a feckless lawyer’s ultimate sacrifice for the woman he loved but lost, this Tale of Two Cities also drives home Dickens’ sharply-detailed contrast of the best and worst of times.” – Lawrence Bommer, Stage and Cinema

“FOUR STARS… The second half successfully delivers plot pay-offs via character coincidences that tie together in one big Dickensian bow.” – Janet Arvia, Examiner.com

“This Tale is something to behold.” – Suzanne Scanlon, Time Out Chicago

“Christopher M. Walsh’s adaptation facilitates the multiple dimensions of his epic narrative through the introduction of a protean Everyman, dubbed ‘The Resurrection Man’ (euphemism for a ‘corpse-snatcher’), to play all of the commoners, and to act as our guide to the volatile world of coups d’état. His commentary allows Walsh to focus on the intrigue associated with a Parisian merchant family’s revenge upon the estranged Darnay’s aristocratic ancestors — a vendetta that will endanger him and those he loves, while exacting terrible risks in unexpected quarters.” – Mary Shen Barnidge, Windy City Times

“A suspenseful and emotional journey to the past. A winning adaptation of this classic story… From the opening moments to the closing heart wrenching moments, it is pure Dickens; but with a swiftness and light. This classic should not be missed.” – Lazlo Collins, Chicago Theatre Review

The Count of Monte Cristo

“For his adaptation of Alexandre Dumas’s classic revenge tale, Lifeline ensemble member Christopher M. Walsh wisely intercuts the title character’s past with scenes from his present-day mission of vengeance. … By gradually revealing the transformation of naive sailor Edmond Dantès into the cunning Count of Monte Cristo, Walsh builds the suspense leading into the action-packed second act.” – Oliver Sava, Time Out Chicago

“A complex and concise masterpiece… Walsh successfully contains the multiple storylines within a solid framework. He boils each scenario down to its essence. Every word is utilitarian in the tight dialogue.” – Katy Walsh, Chicago Theater Beat

The City and the City

“FOUR STARS… Several fans of the book have asked me with incredulity in recent weeks how it could possibly work onstage; the answer is, pretty impressively. … An enjoyable potboiler with a unique twist, The City & The City is a great place to visit.” – Kris Vire, Time Out Chicago

“While the narrative may seem confusing at first look, it comes together beautifully for a dramatic and satisfying climax. It might take an act to get used to the characters and concepts, but once you do, you’ll find yourself immersed in a tale that will satisfy both mystery and science fiction buffs.” – Samantha Nelson, Stage and Cinema

“Bringing this cross-hatched manhunt to the stage was initially the work of adapter Christopher M. Walsh, who has distilled — or perhaps the word is processed — Miéville’s novel with a sure sense of cohesion amid the froth of complexities and the punctuation of surprises. It’s fun just watching this ball of yarn play out.” – Lawrence B. Johnson, Chicago on the Aisle

Soon I Will Be Invincible

“”Nerdy good fun… I had a great time watching all these needy super whatnots act out their angst. … A very fun and fresh night.” – Chris Jones, Chicago Tribune

“FOUR STARS… A summer treat not to be missed.” – Carole Moore, Around the Town Chicago

“SOON I WILL BE INVINCIBLE is invincible! I want to see it again!” – Katy Walsh, The Fourth Walsh

“Walsh demonstrates his grasp of voice, a deft hand with dialogue as exposition and the ability to poke fond, good-natured fun at some of the excesses and tropes of a beloved genre. … In some ways, Walsh’s adaptation surpasses the novel.” – Christine Malcom, Edge Chicago 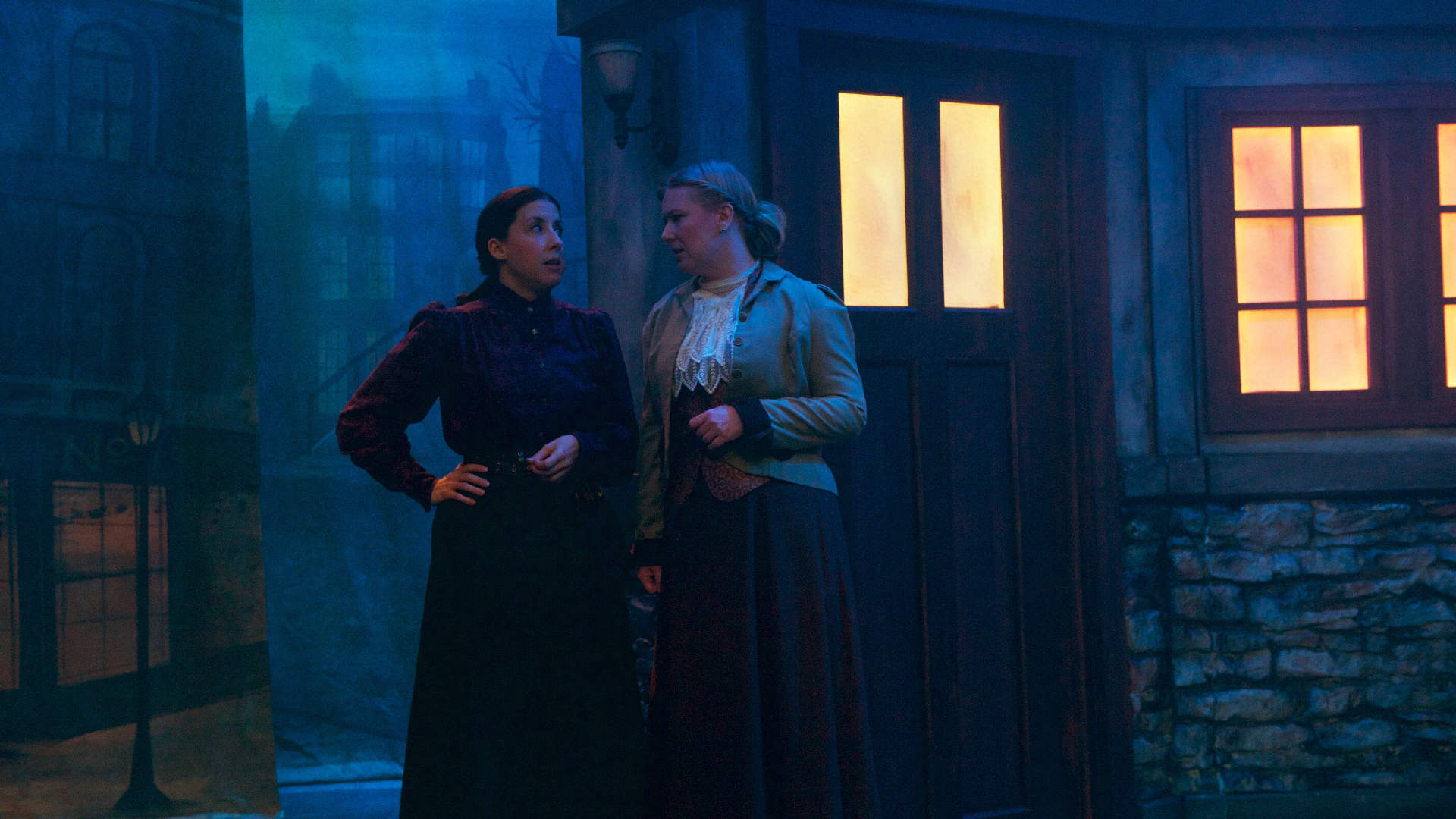