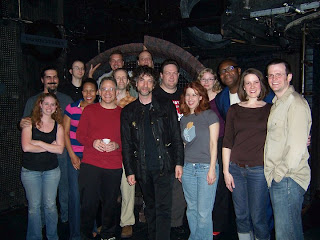 That chubby guy right in the middle? That’s me. The fellow next to me, with the shaggy hair, standing at a jaunty angle? Yeah, that’s Neil Gaiman. Oh, and the guy three heads down from me, with the glasses and blue sports coat? Added bonus: Lenny Henry, who co-created the BBC miniseries of Neverwhere with Neil. Also one of the funniest men in England. They came to see our production last Sunday, June 13th, and were just two of the coolest guys you could ever hope to meet.

Lifeline Theatre did a fine job of keeping their visit a secret as long as they could, but they couldn’t clamp down on actors running out for a cigarette before the show. Sean Sinitski (Mr. Croup – the fellow looming above and behind Neil in the picture) came up to me backstage about fifteen minutes before the start and just said, “Yes or no?” Yes, I said. “Neil’s here.” I spent about four seconds wondering if I was going to either barf or crap my pants, but then reigned it in enough to give, I believe, a respectable performance for one of my all-time favorite authors. I’d like to think we are doing justice to the work, while accomplishing something all-together new and exciting.

And I got Neil’s autograph. He signed one of Croup & Vandemar’s prop business cards. First though, he had to search his many pockets because he knew he had an appropriate “evil pink sharpie.” And he did. He signed it, “With extra teeth.” I’m gonna have it framed. 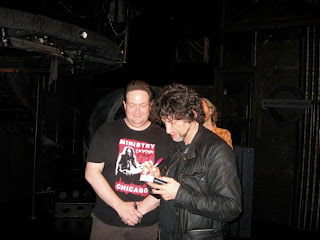