Vacation is over. We flew back to Chicago yesterday. I find myself viewing my hometown with new eyes.

I loved Seattle. It’s just a beautiful town. The atmosphere was night and day compared to Chicago. This was most apparent as we were on our way to the airport yesterday morning. We were in a cab, and an SUV pulled up alongside of us. The window came down and a voice asked our driver, very politely, if they could merge in front of us. Our driver waved them over, and all was well. We took a second cab home after landing at O’Hare. As we approached our exit our driver flicked on his turn signal and began to switch lanes. Another car sped forward and cut us off. That car’s driver then stuck his head out of his window and yelled, “A turn signal doesn’t mean you can just merge, motherfucker!” As we got closer to home I looked at people out on the streets and they all just looked pissed off. Everybody hates each other here. How did I not notice that before?

Seattle doesn’t have the same kind of theater scene as Chicago. If it did, I would be making plans to get back there right now. As it is, such a move is just plain unrealistic. But, I plan on getting back there as soon as possible, even if it’s just for a weekend. 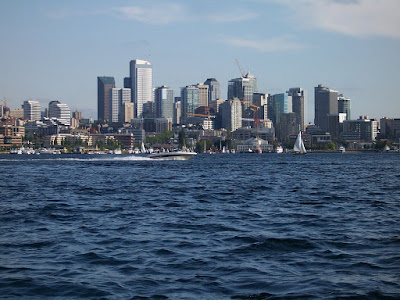